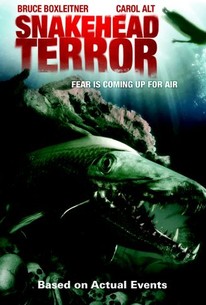 Cashing in on the real-life influx of pesky "snake-head" fish in Midwestern lakes, this inexpensive sci-fi epic is set in a small Maryland fishing community called Cultus Lake. A dangerous strain of mutated snakeheads has decimated the lake's fish population, whereupon Doc Jenkins (played by X-Files' William B. Davis, aka "Cigarette-Smoking Man"), the shady owner of a nearby chemical plant, fills the water with pollutants to kill off the invaders. At the same time, the local leaders, desperate to pull Cultus Lake out of a severe financial slump, has dumped human growth hormones in the lake to improve the stock. You guessed it: Both the chemicals and hormones succeed only in making the snakeheads even larger and more ferocious--and worse still, they are now leaving the lake and crawling around on dry land, in search of human blood! Caught in the middle of the crisis is Sheriff Patrick James (Bruce Boxleitner) and the standard-issue beautiful female biologist Lori Dale (Carol Alt). An amalgam of every cheesy CGI effect ever seen on the many Jaws ripoffs that have proliferated as made-for-cable and direct-to-video thrillers, Snakehead Terror received its biggest audience when it was telecast by the Sci-Fi network on March 13, 2004.

William B. Davis
as Doc Jenkins

There are no critic reviews yet for Snakehead Terror. Keep checking Rotten Tomatoes for updates!