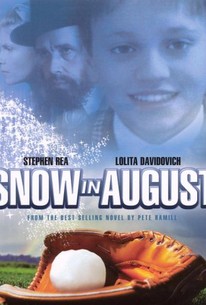 Based on the novel by Pete Hamill, the made-for-cable movie Snow in August is set in 1947 Brooklyn. The core of the story is the friendship between Michael Devlin (Peter Tambakis), a fatherless Catholic boy, and Rabbi Judah Hirsch (Stephen Rea), a Jewish immigrant from Czechoslovakia. A local gang of anti-Semitic hoodlums, led by Frankie McCarthy (Adam McDonald), takes offense at the warm relationship between Michael and the rabbi, and threatens to cause a lot of hurt if Michael doesn't remain with his "own kind." Adding to Michael's burden is the fact that he has witnessed Frankie's gang, the Falcons, administer a bloody beating to a local Jewish merchant, frightening him into silence. The solution to Michael's problem manifests itself in his growing fascination with the legend of "the Golem," the vengeful statue that was supposed to have protected the Prague Ghetto from persecution centuries before -- and also hinges upon the boy's adoration of the movie-serial hero Captain Marvel (shown via film clips from the 1941 Republic chapterplay of the same name). Lolita Davidovitch co-stars as Michael's widowed mother Kate. Filmed in Montreal, Snow in August made its Showtime cable network bow on August 12, 2001.

Kent McQuaid
as Falcon
View All

Critic Reviews for Snow in August

There are no critic reviews yet for Snow in August. Keep checking Rotten Tomatoes for updates!

Audience Reviews for Snow in August