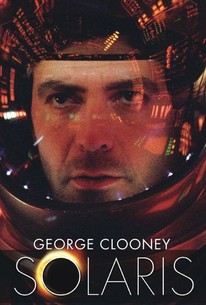 Slow-moving, cerebral, and ambiguous, Solaris is not a movie for everyone, but it offers intriguing issues to ponder.

A therapist travels to a distant space station to treat a group of astronauts traumatized by mysterious entities -- and ends up having to deal with an entity of his own -- in this second film version of Stanislaw Lem's philosophical sci-fi novel. Solaris stars George Clooney as Chris Kelvin, a psychologist still mourning the loss of his wife Rheya (Natascha McElhone) when he's implored by a colleague named Gibarian (Ulrich Tukur) to investigate the increasingly weird goings-on at the Prometheus space station. By the time Kelvin gets there, Gibarian has committed suicide, leaving only the cryptic, babbling Snow (Jeremy Davies) and the paranoid, guarded Gordon (Viola Davis), both of whom are holed up in their respective rooms. As Kelvin interrogates the skeleton crew, he learns that they've had unwanted "visitors," apparitions of long-dead friends, family, and loved ones who are apparently being generated by the interstellar energy source Solaris. The doctor is dubious of their claims until one night he, too, is greeted by his wife Rheya (Natascha McElhone), whose death still torments him. At first skeptical of the new Rheya, Kelvin gradually becomes obsessed with her -- and with the guilt that he feels over their troubled marriage -- to the point where the others begin to fear for his sanity. Produced by James Cameron, Solaris represented director Steven Soderbergh's first screenplay credit since the independently financed Schizopolis in 1996. ~ Michael Hastings, Rovi

Michael Ensign
as Friend No. 1

Morgan Rusler
as Suited Professional No. 2

John Cho
as Suited Professional No. 1

Elpidia Carrillo
as Friend No. 2

Kent Faulcon
as Patient No. 1

Lauren Cohn
as Patient No. 2
View All