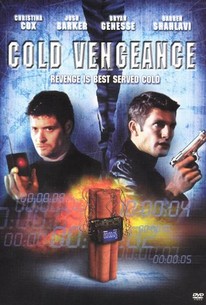 A former gang member finds the tempting allure of crime too difficult to resist in this crime thriller from director Jalal Merhi. Falling on hard times financially and facing increasing pressure from his former gang mates, Jimmy Coy (Josh Barker) agrees to a contract from crime boss Arthur Hallam (Paul Coufos) that involves the destruction of a local ice skating facility. Although the mission initially appears to be going as planned, it soon encounters a roadblock when Jimmy falls for beautiful skating coach Cassandra Diaz (Christina Cox). As their relationship develops and Cassandra begins to confide in Jimmy, the conflicted gangster takes pity on the girl when she reveals that her stepfather Leon (Patrick Philips) is abusive. Following a violent argument between Leon and Cassandra's mother Stella Joan Kennedy, Jimmy discovers a hidden link between Leon and Hallam. When Hallam realizes that Jimmy is no longer capable of fulfilling his duties, he hires Russ Fortus (Darren Shahlavi) to finish the job and kill Jimmy. On the eve of an annual figure skating gala, a tense face-off between Jimmy and Russ leads to an explosive climax in which no one -- including hundreds of spectators -- may survive.

Jon Kralt
as Bar Thug No. 1

Rick Moore
as Bar Thug No. 2

Alex Dworak
as Bar Thug No. 3

Ward McMahon
as Man No. 3

James Michalopolous
as Man No. 4

Bruce Pinard
as Man No. 7

Critic Reviews for Sometimes a Hero

There are no critic reviews yet for Sometimes a Hero. Keep checking Rotten Tomatoes for updates!

Audience Reviews for Sometimes a Hero

There are no featured audience reviews for Sometimes a Hero at this time.