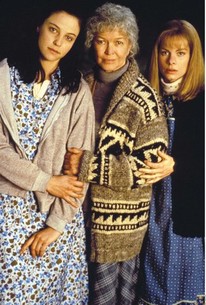 With the help of her former warden, ex-con Percy Talbott moves to Gilead, Maine to make a fresh start. She gets a job waiting tables at the Spitfire Grill and rents a room above it. The cafe proprietor is the irritable Hannah Ferguson. Friendliness is not a word used to describe Gilead and the locals are suspicious of Percy. That she does not conceal her incarceration does not help them warm to her. This gentle drama tinged with joy and sadness centers on the relationships between Percy, the townsfolk and the Spitfire Grill. One day Hannah suffers a bad fall and is forced to bed to recover. To help her, shrewd local businessman Nahum Goddard, whose biggest concern is preserving the character of the town so as to attract renewed interest in an abandoned granite quarry, sends his introverted wife, Shelby to help Percy at the Grill. His ulterior motive is to have Shelby spy on her and report anything strange, but Shelby and Percy instead become good friends. Eventually, the three women decide to sell the restaurant by holding a national raffle/essay contest in which contestants send in $100 and an composition explaining why they want it.

Will Patton
as Nahum Goddard

John M. Jackson
as Johnny B.

Patty Smith
as Customer No. 1

Dennis Mientka
as Customer No. 2

Stuart Jackson
as Customer No. 3

Monica Callan
as Woman at Bar

Richard Addis
as Man at Bar
View All

Critic Reviews for The Spitfire Grill

Audience Reviews for The Spitfire Grill