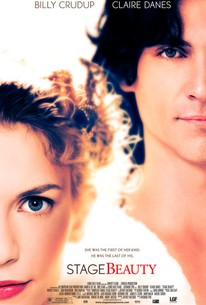 Uneven but enjoyable, Stage Beauty uses historical events as the springboard for a well-acted romance with a charming Shakespearean spin.

It's the 1660s, and Edward 'Ned' Kynaston is England's most celebrated leading lady. Women are forbidden to appear on stage and Ned profits, using his beauty and skill to make the great female roles his own. But King Charles II is tired of seeing the same old performers in the same old tragedies. Since no one will take him up on his suggestion to improve Othello with a couple of good jokes, he decides to liven the royal palate by allowing real women to tread the boards. In a slightly less progressive spirit, he rules that men may no longer play women's parts. This is good news for the monarch's mistress, the saucy, stage-struck Nell Gwyn. It is also good news for Maria, Kynaston's lovelorn young dresser who has been secretly performing at a seedy tavern in lavish costumes borrowed from her employer. It is very bad news for Ned, who plummets from his exalted position as one of London's most desirable females to become a virtual nobody, virtually overnight. Cast out of the spotlight, Ned seems headed for burlesque obscurity until Maria, now a rising star, takes it upon herself to make a man of him again.