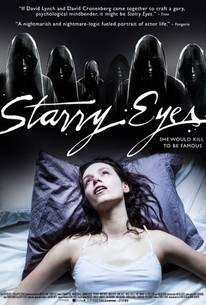 In the city of dreams, a desperate actress will put it all on the line for the role of a lifetime... no matter what the cost. Determined to make it in Hollywood, aspiring actress Sarah Walker (Alexandra Essoe) spends her days working a dead-end job under the watchful eye of her patronizing boss, Carl (Pat Healy), enduring petty friendships with other struggling artists and competing actors (Amanda Fuller, Fabianne Therese, Noah Segan, Shane Coffey and Natalie Castillo) and going on countless casting calls in the hopes of finally catching her big break. After a series of strange auditions with a mysterious casting duo (Marc Senter & Maria Olsen) from famed production company Astraeus Pictures, Sarah finally lands the leading role in their newest film. The producer (Lou Deszeran) thinks she has a bright future ahead of her, but this coveted opportunity comes with bizarre ramifications that will transform Sarah both mentally and physically into something beautiful and terrifying. From Travis Stevens, the producer of Cheap Thrills and Jodorowsky's Dune, Dennis Widmyer & Kevin Kölsch's Starry Eyes is an occult tale of ambition, possession, and the true price of fame.(C) Official site

The 21 Masters Of Horror Shaping the Genre Right Now
50 Fresh Scary Movies and TV Shows to Watch on Netflix
Now Streaming: Star Wars, The Voices, The Big Lebowski, and More
View All