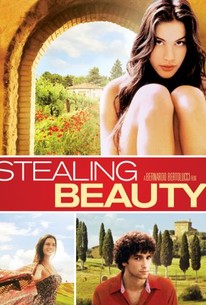 This beautiful if ponderous soufflé of a film from director Bernardo Bertolucci serves more as an Italian travelogue than a drama. Liv Tyler stars as Lucy Harmon, an American teenager arriving in the lush Tuscan countryside to visit family friends residing there. Lucy visited four years earlier and exchanged a kiss with a handsome boy with whom she hopes to become reacquainted. Lucy's mother has committed suicide since then, and the teenager also hopes to discover the identity of her father, whom her mother hinted was a resident of the villa. Once she arrives, Lucy meets a variety of eccentric visitors, including a dying gay playwright (Jeremy Irons), a sculptor (Donal McCann), an entertainment lawyer (D.W. Moffet), and several others. Lucy has decided to lose her virginity and becomes an object of intense interest to the men of the household, but the suitor she finally selects is not the initial object of her affection. Stealing Beauty boasted an intriguing parallel between actress Tyler's role and her real life. The daughter of a famed rock and roll star, she was brought up believing that her father was someone else, a fact that Bertolucci may have had in mind when writing the story. ~ Karl Williams, Rovi