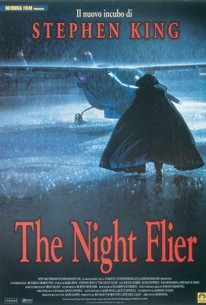 Stephen King's short story, The Night Flier, originally appeared in Prime Evil: New Stories by the Masters of Modern Horror (1988), edited by Washington, D.C., lawyer Douglas E. Winter, and it was later collected in King's Nightmares & Dreamscapes (1993). This film adaptation aired on HBO (November 1997) and was seen in European territories prior to the American theatrical release. An unknown vampiric Cessna pilot is suspected of night murders at remote airfields. At the tabloid Inside View, longtime reporter Richard Dees (Miguel Ferrer) expresses disinterest, so eager newcomer Katherine Blair (Julie Entwisle) is instead given the story by editor Merton Morrison (Dan Monahan). Then there's another murder, prompting Dees to reverse himself. He demands the story back and takes after the killer in his one private plane, tracking witnesses, gathering grue, and staging photos when the subject looks too dull. Blair is also on the trail, and the two newshounds are soon competing. Both are out for blood -- and so is the night flier. Stephen King campaigned for director Mark Pavia and co-scripter Jack O'Donnell to steer The Night Flier after he saw their short film Drag, which King called "the best short horror film I've seen in 20 years." Locations included Wilmington, North Carolina. The character of tabloid journalist Richard Dees was first introduced in Stephen King's 1979 novel The Dead Zone.

J.R. Rodriguez
as Terminal Cop No. 1

Robert Casey
as Terminal Cop No. 2

Kelley Sims
as Intern
View All