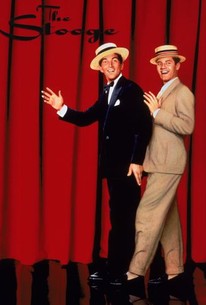 Filmed right after 1951's At War with the Army, the Dean Martin-Jerry Lewis vehicle The Stooge was shelved until late 1952 to make way for another military farce, Jumping Jacks. When Stooge finally hit the screens Martin and Lewis fans were surprised by its dramatic content and the subdued performances of its stars. Martin plays an obnoxious vaudeville singer named Bill Martin, who gets nowhere professionally until he is accidentally teamed with goofy would-be comic Ted Rogers (Lewis). Bill and Ted climb to the top of the showbiz heap with a riotous act wherein Bill's onstage singing is interrupted by Ted's heckling from the audience (not unlike Martin and Lewis' genuine nightclub act). As his fame grows, so does Bill's ego, and eventually he ditches Ted to strike out on his own. Without his partner, however, Bill is a failure, so it's up to faithful Ted to save the day and patch up the friendship. The "femme angle" (to use Variety's phrase) is handled by Marion Marshall as Frecklehead Tait and Polly Bergen as Mary Turner. It's worth noting that The Stooge was Jerry Lewis' favorite Martin and Lewis comedy.

Critic Reviews for The Stooge

Audience Reviews for The Stooge

There are no featured audience reviews for The Stooge at this time.