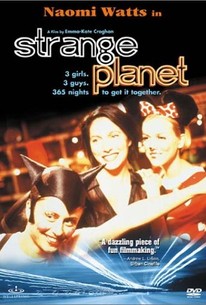 The second film of Emma-Kate Croghan, who made her debut in 1996 with Love and Other Catastrophes, Strange Planet is a romantic comedy about two apparently different groups of friends. During 12 months, we follow six characters and their problems in search of love and happiness. Judy, Alice, and Sally live together and are best friends, but they have different needs and ambitions. Judy tries to cure her passion for elderly men by concentrating on her career; Alice suffers from a broken heart and high morals; and Sally wants everything. Ewan, Joel, and Neil run a law firm together and also have their problems. Ewan does not like his new adult life of responsibility, so he quits; Joel's world falls apart when his wife leaves him; and Neil is desperately looking for someone to love. The coming of the millennium provides the crucial moment when they meet in a secluded beach house on New Year's Eve 1999 and everything is unraveled. The film was screened at the Stockholm International Film Festival in 1999. ~ Gönül Dönmez-Colin, Rovi

There are no critic reviews yet for Strange Planet. Keep checking Rotten Tomatoes for updates!

There are no featured audience reviews for Strange Planet at this time.