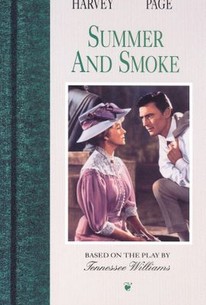 Alma (Geraldine Page) is the sexually repressed, neurotic minister's daughter in a small Mississippi town. She loves her neighbor Dr. John Buchanan (Laurence Harvey), whose father is also a physician (John MacIntire). Father and son have different approaches in medical philosophy. John, who considers Alma to be only a lifelong friend, has eyes for the dance hall girl Rosa (Rita Moreno). Alma takes John to the dance hall in an effort to get closer, but she runs off when he makes a pass at her. John becomes engaged to Rosa, throwing a party at home when his father is out of town. A jealous Alma calls the elder Dr. Buchanan and informs him of the wild party commencing in his absence. Tragedy ensues when the two future fathers-in-law quarrel a the scene of the revelry. Alma takes comfort in the arms of a traveling salesman she meets in the park. In her efforts to find love, she is oblivious to unhappiness left in the wake of her disturbing behavior. This film of the Tennessee William's play comes nine years after the Broadway stage production. Una Merkel was nominated for best supporting actress for her role as John Buchanan's mother. Page was nominated for best actress, and Elmer Bernstein's musical score was also nominated.

Cheryl Anderson
as Alma as a Girl

Almira Sessions
as Woman
View All

Critic Reviews for Summer and Smoke

Audience Reviews for Summer and Smoke