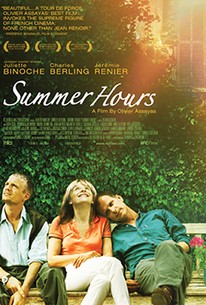 Three siblings must come to terms with their mother's mortality as they decide what to do with her valuable belongings in this warm family drama from filmmaker Olivier Assayas. Hélène Berthier (Edith Scob) is about to turn 75, and her children are gathering at her home in the country for a party. Adrienne (Juliette Binoche) has flown in from New York City, where she lives with her boyfriend, James (Kyle Eastwood). Jérémie (Jérémie Renier) has taken a rare break from his globe-trotting business interests to stop by with his wife (Valérie Bonneton). And Frédéric (Charles Berling), the only one who lives close enough to visit regularly, has also come with his spouse, Lisa (Dominique Reymond). Hélène has inherited a large and valuable collection of art from her brother, and with her health beginning to fail, she approaches Frédéric and asks that he, Jérémie, and Adrienne come up with a plan to deal with the pieces after her death. Frédéric wants to keep the collection together and see if they can persuade a gallery to purchase and present them as a set. Jérémie and Adrienne have other ideas, but as he's pondering a business opportunity in China and she's planning on settling in America for good, they don't have as much influence over the final decision as Frédéric. L'Heure d'Été (aka Summer Hours) was produced in part by the celebrated French art gallery Musée d'Orsay, and was one of a handful of films created to honor the museum in its 20th anniversary year.