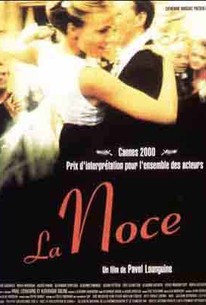 In this frantic comedy from Russia, Mishka (Marat Basharov) lives in a small town near Moscow, where like most of his neighbors, he works as a miner. Years ago, Mishka was in love with a pretty girl named Tania (Maria Mironova), who moved to Moscow to become a model. After five years in the big city, Tania returns, and she immediately tells Mishka that she wants to marry him. Mishka is thrilled and starts planning a big wedding, though his parents wonder out loud what the bride-to-be was up to while she was gone. One snag in organizing the wedding party is that the mine is having a severe cash flow problem and no one has been paid for six months. However, on the day of the nuptials, the money finally arrives (and Mishka's paycheck just about covers the cost of the reception); soon half the city is celebrating Mishka and Tania's wedding, and as the vodka begins to flow and many friends and relatives arrive, chaos ensues. La Noce was shown in competition at the 2000 Cannes Film Festival; it was the only Russian film screened as an official entry that year. ~ Mark Deming, Rovi

There are no critic reviews yet for Svadba. Keep checking Rotten Tomatoes for updates!

There are no featured audience reviews for Svadba at this time.