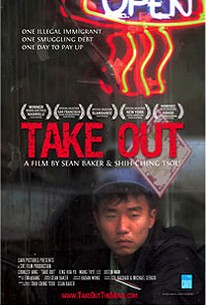 Take Out presents an unvarnished view of one immigrant's experiences as a restaurant deliveryman -- and leaves the audience with plenty of food for thought.

Sean Baker and Shih-Ching Tsou make their feature debut as writer/directors with the documentary-style DV drama Take Out. Korean-American actor Charles Jang stars as Ming Ding, a Chinese illegal immigrant struggling to make ends meet working as a deliveryman at a take-out restaurant. His day begins when he is rousted, beaten, and threatened with more violence by two men over an 800-dollar debt, which he incurred because he felt obligated to send some money back to his wife and child in China. Ming scrapes together what he can. His co-worker, Young (Jeng-Hua Yu), lends him some money, and offers to forgo his deliveries for the day so Ming can make more cash. The film follows the stoic Ming, who speaks little English, over the course of the day as he interacts with the cooks and restaurant manager (Wang-Thye Lee, an actual employee of the restaurant where Take Out was filmed), and races in the rain on a multitude of deliveries on the Upper West Side of Manhattan, interacting with a broad spectrum of New Yorkers. The filmmakers made Take Out on an extremely low budget, even by indie standards, using the Internet to find their cast, and shooting at the restaurant during business hours with a skeleton crew. Take Out was shown at the 2004 New York Asian American Film Festival and at the 2004 Nashville Film Festival, where it won the Grand Jury Prize.

Kevin Karagulian
as Chicken or Beef

Monica Kester
as Thank You Delivery

Joe Franza
as Not a World Delivery

Baqi Abdush-Shaheed
as Clean the Shrimp

Gil Selinger
as Only Euros

Preet Pannu
as Only Euros Wife

Peter Camacho
as Other Half of the Chicken

Angel Feliciano
as Ketchup on the Fries Guy #1

Julio Lugo
as Ketchup on the Fries Guy #2

Edwin Banyar
as Ketchup on the Fries Guy #3

Critic Reviews for Take Out

Audience Reviews for Take Out