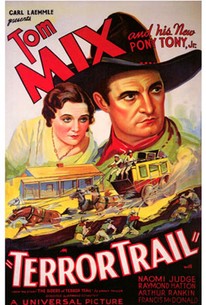 Tom Mix goes up against a ruthless gang of rustlers headed by a crooked army colonel in this, his penultimate Western for Universal. When a vigilante group assembled by Colonel Charles Ormsby (John St. Polis) fails to make a dent in the rustlings -- primarily because Ormsby and the local sheriff (Frank Brownlee) are the secret leaders of the gang -- rancher Tom Munroe (Mix) is assigned by the governor of Arizona to look into things. With the help of local cowboy Lucky Dawson (Raymond Hatton), Tom discovers that young rancher Bernie "Little Casino" Laird (Arthur Rankin), the weakling brother of Norma Laird (Naomi Judge), is secretly a member of the gang. When the rustlers turn to robbing the stage, Mix manages to arrest Bernie and two henchmen (Francis McDonald and Robert Kortman), but all three are freed from jail by Ormsby. During a climactic shootout at the Laird ranch, young Bernie reveals that Ormsby and the sheriff are crooked and the entire gang is rounded up and arrested.

There are no critic reviews yet for Terror Trail. Keep checking Rotten Tomatoes for updates!

There are no featured audience reviews for Terror Trail at this time.