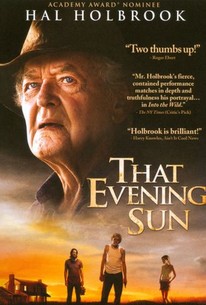 Powered by a formidable leading turn from Hal Holbrook, That Evening Sun is a prime cut of southern gothic that offers plenty of meditative atmosphere for audiences to brood over.

An aging farmer fights to keep the home that is rightfully his after fleeing from a nursing home and discovering that his son has leased the family farm to his old nemesis. Placed in a nursing home by his son and promptly forgotten, Abner Meecham (Hal Holbrook) realized that waiting to die was no way to live. Determined to enjoy his last days, Abner packed his bags and set his sights on the family farm. At least there he could die on his own land, in familiar surroundings. But Abner is in for a rude awakening, because upon returning home he discovers that his son has leased the farm to Lonzo Choat. Abner never cared much for Lonzo, and when Lonzo refuses to leave, Abner takes up residence in an old tenant shack on the property. Before long, their dispute becomes volatile, each man believing himself to be in the right, and refusing to back down from his position. Betrayed by his son and haunted by dreams of his beloved deceased wife, Abner draws a line in the sand in an attempt to reclaim his life. As threats are made and tension begins to brew, it's only a matter of time before the situation turns savage. ~ Jason Buchanan, Rovi

News & Interviews for That Evening Sun

Critics Consensus: A Christmas Carol Dazzles But Disappoints
View All

Critic Reviews for That Evening Sun

Audience Reviews for That Evening Sun