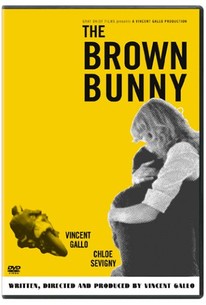 More dull than hypnotic, The Brown Bunny is a pretentious and self-indulgent bore.

Actor and musician Vincent Gallo takes on the role of writer, director, editor, cinematographer, and star with his second filmmaking effort, The Brown Bunny. Motorcycle racer Bud Clay (Gallo) drives his van across the country in search of his lost love, Daisy (Chloë Sevigny). He stops at her parents' house and sees the brown bunny she left behind. Along the rest of the way, he stops for gas, rides his bike, and makes out with a woman at a roadside rest area (Cheryl Tiegs). He meets up with Daisy when he finally arrives in Los Angeles, leading to the revelatory conclusion in his hotel room. The Brown Bunny premiered in competition at the 2003 Cannes Film Festival in a working cut of 119 minutes that was widely panned; a 93 minute final edit was shown at subsequent festivals and premiered in the United States in the summer of 2004.

News & Interviews for The Brown Bunny

15 Boundary-Pushing Movies That Broke Sexual Taboos
Antonio Tarver Fights Rocky Balboa for Real
In Other News…Vincent Gallo: Weirder Than We Thought
View All

Critic Reviews for The Brown Bunny

Audience Reviews for The Brown Bunny