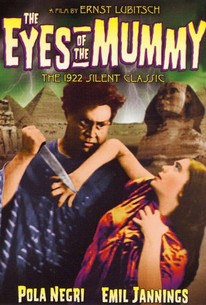 The Eyes of the Mummy

The Eyes of the Mummy Ratings & Reviews Explanation

Considering the poor quality of this UFA-produced melodrama starring Pola Negri and Emil Jannings, it's quite likely the two actors played in it before doing Passion and One Arabian Night (known in Germany as Madame DuBarry and Sumurun respectively). Negri plays Marah, the high priestess of Ug-Balak, a mysterious Egyptian shrine. Albert Vernon (Henri Liedke), an English engineer visiting Egypt, becomes intrigued when he runs into a man who has visited this shrine. Even though the visit has clearly brought the fellow to the brink of a physical breakdown, Vernon decides he has to go to see Ug-Balak for himself. There he meets Radu (Jannings), the shrine's keeper. He also finds a mummy and a door, behind which is Marah. She tells Vernon that Radu kidnapped her and forced her to be the mummy's "eyes." Vernon takes the girl and they escape to England. Eventually Radu tracks them down and after terrorizing Marah for a while, he inexplicably decides to kill himself in lieu of taking her back to Egypt (obviously something was left on the cutting room floor between Germany and the United States). This picture has almost nothing to recommend it except for a brief scene in which Negri gets to dance, prompting Variety to note that she "discloses unsuspected skill." Perhaps that's because the critic didn't know that she started off her performing career by training as a ballet dancer.

Critic Reviews for The Eyes of the Mummy

Audience Reviews for The Eyes of the Mummy

There are no featured audience reviews for The Eyes of the Mummy at this time.

The Eyes of the Mummy Quotes