The Family That Preys 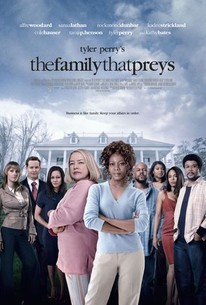 The Family That Preys

Tyler Perry's The Family that Preys treads the filmmaker's established terrain of family loyalty and moral uprightness, though the occasionally predictable plot slides forward, aided by an excess of soapy melodrama.

The Family That Preys Photos

Alfre Woodard and Kathy Bates star in writer/director Tyler Perry's family drama about an upper-crust family and their working-class counterparts, who discover that scandal knows no social boundaries. Charlotte Cartwright (Bates) and Alice Pratt (Woodard) may be from different sides of the tracks, yet over the years they've managed to nurture a strong and healthy friendship. That friendship is put to the ultimate test, however, when their adult children begin to act out in ways that neither parent ever saw coming. Alice's daughter Andrea (Sanaa Lathan) is married to a trusting husband named Chris (Rockmond Dunbar), but lately she's been betraying that trust by sleeping with her boss, William (Cole Hauser), who just so happens to be Charlotte's son. William is married to Jillian (KaDee Strickland), and in addition to being unfaithful, he's also scheming to take over the role of COO at his mother's lucrative construction firm. Meanwhile, Alice's other daughter, Pam (Taraji P. Henson), and her husband, Ben (Perry), a faithful family man and construction worker, have both recognized that their family has strayed from the course of righteousness, and become determined to help their loved ones back on the right path. When paternity secrets, shady double dealings, and a series of other scandals become too much for Charlotte and Alice to take, the two women set out on a cross-country trip in order to clear their heads and devise a plan for saving their families. ~ Jason Buchanan, Rovi

News & Interviews for The Family That Preys

Critic Reviews for The Family That Preys

Audience Reviews for The Family That Preys

The Family That Preys Quotes