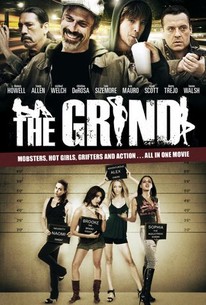 The Grind is a modern urban drama, set in a world of sex, drug dealers, dance nightclubs and loan sharks. Vince (Freddie Connor) is the nightclub manager of The Grind in Hackney, East London and having fought his way to a decent living and respectable lifestyle he is determined to settle down and take life easier. Upon meeting and starting a relationship with Nancy (Zoe Tapper) Vince's dream of running a casino for his Boss and getting married looks set. Bobby (Gordon Alexander), Vince's best friend from school, is released from prison and their friendship soon falls apart, Bobby's addiction to cocaine and gambling spirals out of control and he now owes a huge amount of money to Vince's boss, Dave (Jamie Foreman); owner of The Grind and an East End loan shark. Vince's life takes a dramatic turn for the worse. Loyalties are tested and friendships are pushed to their limits. 'The Grind' features a commanding ensemble cast including Jamie Foreman (Layer Cake, Nil By Mouth, Oliver Twist, Doctor Who, Eastenders), Danny John-Jules (Death in Paradise, Red Dwarf, Lock Stock and Two Smoking Barrels), Zoe Tapper (Survivors, Desperate Romantics) and Kellie Shirley (Eastenders, The Office). Also appearing in cameo roles, are Dynamo (the street magician whose latest series 'Dynamo: Magician Impossible' on Watch has been a huge success) and Sway (MOBO award winning British grime artist).

Tanya Allen
as Courtney
View All

Critic Reviews for The Grind

There are no critic reviews yet for The Grind. Keep checking Rotten Tomatoes for updates!

Audience Reviews for The Grind