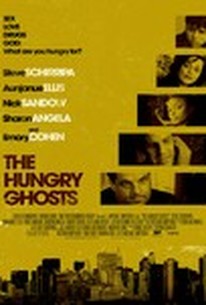 The Tibetans describe a type of hell in which souls with tiny mouths are afflicted with enormous, insatiable bellies. These inhabitants are considered 'the hungry ghosts.' Michael Imperioli's directorial debut THE HUNGRY GHOSTS portrays an eclectic group of New Yorkers in search of spiritual and emotional fulfillment. Frank (Steven R. Schirripa, The Sopranos, Fear and Loathing in Las Vegas) a late-night radio host, is trapped in a tenuous relationship with his son, Matthew (Emory Cohen in his screen debut.), as a result of Frank's drug addition and gambling problems. When Matthew storms out of a therapy session with his father, he becomes lost in the labyrinth of New York City. With Matthew missing, Frank is forced to confront his ex-wife, Sharon (Sharon Angela, The Sopranos, Tony & Tina's Wedding), over his fractured relationship with his son. While searching for his son, Frank meets Nadia (Aunjanue Ellis, Ray, True Blood.) Nadia recently left her destructive, alcoholic lover Gus (Nick Sandow, Connie & Carla, Third Watch) and is trying to get her life back on track. She turns to spirituality to help her find peace as Gus aggressively tries to win her back. THE HUNGRY GHOSTS deals with the intersection of several perishing lives stuck in a cycle they wish to escape, capturing the zeitgeist of our post-millennium New York City, in which the desperation of the West collides with the religious teachings of the East. -- (C) Virgil

Jerry Grayson
as Jerry
View All

Critic Reviews for The Hungry Ghosts

Audience Reviews for The Hungry Ghosts

There are no featured audience reviews for The Hungry Ghosts at this time.