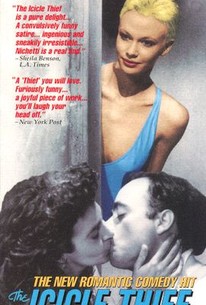 As indicated by its title, The Icicle Thief shamelessly parodies Vittorio De Sica's neorealist classic The Bicycle Thief--but it's much more than a mere lampoon. Director Maurizio Nichetti appears on-screen as a pompous filmmaker whose new film The Icicle Thief is the last-minute substitute for a more highly regarded "masterpiece" on an intellectual Italian TV program. The film, in black and white, begins to unreel on screen, only to be interrupted at crucial moments by loud, vulgar, full-color commercials. The film-within-a-film's central character (Nichetti again!), who works in a chandelier factory, is suddenly cut adrift when there's a power failure at the TV studio. Soon the hero of the film finds himself in the alien environment of TV advertising, and separating reality from fantasy becomes a lost cause. The worst of it is, the viewers at home don't notice that anything's amiss--they've been so long inundated by commercial intrusions on theatrical films that they're grown numb to the artistic outrages perpetrated upon both director Nichetti and star Nichetti. The various clever cinematic tricks deployed by Nichetti in Icicle Thief are reminiscent of another highly regarded film classic: cartoon director Chuck Jones' Duck Amuck.

Maurizio Nichetti
as Antonio Piermattei / The Director of the Film

Salvatore Landolina
as Sergeant
View All

Critic Reviews for The Icicle Thief

Audience Reviews for The Icicle Thief

There are no featured audience reviews for The Icicle Thief at this time.