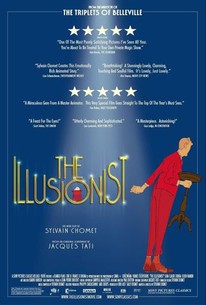 An engrossing love letter to fans of adult animation, The Illusionist offers a fine antidote to garish mainstream fare.

The Illusionist is one of a dying breed of stage entertainers. With emerging rock stars stealing his thunder in the late 1950s, he is forced to accept increasingly obscure assignments in fringe theatres, at garden parties and in bars and cafés. Then, while performing in a village pub off the west coast of Scotland, he encounters Alice, an innocent young girl, who will change his life forever. Watching his performance for the excited villagers who are celebrating the arrival of electricity on their remote island, Alice is awestruck by his show and believes his tricks are real magic. Though they don‟t speak the same language, the two lonely strangers quickly bond through small kindnesses. Fascinated by The Illusionist, Alice stows away on his departing ship and follows him to Edinburgh. There, they quickly fall into a father - daughter relationship, with Alice keeping their home at a boarding house for vaudevillians, while he goes to work in a small local theatre. Enchanted by her enthusiasm for his act, The Illusionist rewards Alice with increasingly lavish gifts he has 'conjured' into existence. Desperate not to disappoint her, he cannot bring himself to reveal that magic does not exist and that he‟s driving himself to ruin working all night jobs to buy her gifts. As The Illusionist grows older, Alice grows up. She falls in love with a young man and is no longer so enchanted by The Illusionist‟s conjuring. She moves on with her life, and The Illusionist no longer has to pretend. Untangled from his own web of deceit, he resumes his life as a much wiser man. -- (C) Sony Pictures Classics

Jean-Claude Donda
as The Illusionist, Tatischeff

News & Interviews for The Illusionist (L'illusionniste)

Critic Reviews for The Illusionist (L'illusionniste)

Audience Reviews for The Illusionist (L'illusionniste)