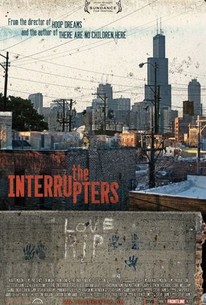 Impeccably crafted and edited, The Interrupters is a tough and honest documentary about street violence that truly has the power to inspire change.

The Interrupters tells the moving and surprising stories of three Violence Interrupters who try to protect their Chicago communities from the violence they once employed. From acclaimed director Steve James and bestselling author Alex Kotlowitz, this film is an unusually intimate journey into the stubborn persistence of violence in our cities. Shot over the course of a year out of Kartemquin Films, The Interrupters captures a period in Chicago when it became a national symbol for the violence in our cities. During that period, the city was besieged by high-profile incidents, most notably the brutal beating of Derrion Albert, a Chicago High School student, whose death was caught on videotape. The film's main subjects work for an innovative organization, CeaseFire, which believes that the spread of violence mimics the spread of infectious diseases, and so the treatment should be similar: go after the most infected, and stop the infection at its source. --(C) Official Site

News & Interviews for The Interrupters

Watch Online: Pan’s Labyrinth, Clueless, Before Midnight, and More Certified Fresh Picks on Netflix and Amazon Prime
Critics Consensus: Cowboys and Aliens is All Mixed Up
View All

Critic Reviews for The Interrupters

Audience Reviews for The Interrupters