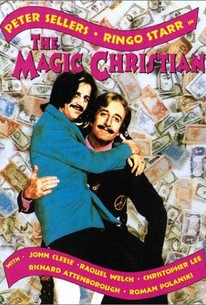 This zany British comedy finds a homeless hobo (Ringo Starr) being adopted by the world's richest man, Sir Guy Grand (Peter Sellers). Setting sail on the luxury liner The Magic Christian, Sir Grand tests the limit of human avarice. With money to motivate the greedy, Laurence Harvey combines his Hamlet soliloquy with a striptease. A vile cesspool of excrement is seeded with cash and the money-hungry dive right in. Wilfred Hyde White is the drunken captain, Yul Brynner is uncredited in his performance as a chanteuse transvestite, and John Cleese is the director of Sotheby's auction house. Roman Polanski, Richard Attenborough and Raquel Welch also appear in this offbeat comedy. Paul McCartney wrote and produced "Come and Get It," the first international hit from the power-pop group Badfinger. John "Speedy" Keene wrote "Something In The Air" and performed the track with his group Thunderclap Newman. Sellers, Cleese, Graham Chapman and Terry Southern co-authored the screenplay taken from Southern's novel. ~ Dan Pavlides, Rovi

Raquel Welch
as Priestess of the Whip

Tom Boyle
as My Man Jeff

John Cleese
as Director In Sotheby's

Guy Middleton
as Duke of Montisbriar

Joan Benham
as Socialite in Sotheby's

Patrick Holt
as Duke in Sotheby's

John Lennon
as Himself (Getting on Boat)

News & Interviews for The Magic Christian

Total Recall: Across the Universe And The Beatles On Film
View All

Critic Reviews for The Magic Christian

Audience Reviews for The Magic Christian