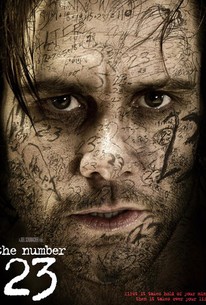 Jim Carrey has been sharp in a number of non-comedic roles, but this lurid, overheated, and self-serious potboiler is not one of them. The Number 23 is clumsy, unengaging, and mostly confusing.

A mysterious novel, "The Number 23," given to Walter Sparrow by his wife Agatha as a birthday gift, depicts a chilling murder mystery that seems to mirror Walter's life in dark and uncontrollable ways. The life of the book's main character, a brooding detective named Fingerling, is filled with moments that echo Walter's own history. As the world of the book starts to come alive, Walter becomes infected by the most frightening and evocative part of it: Fingerling's obsession with the hidden power of the number 23. This obsession permeates the book and begins to control Walter. He sees the number everywhere in his own life and becomes convinced that he is damned to commit the same horrific crime as Fingerling--murder. Nightmarish fantasies come to haunt Walter, ones that portend terrible fates for his wife as well as family friend Isaac French, placing him on a desperate quest to understand the mysteries of the book. If he can unlock the power behind the number 23, he may be able to change his future.

News & Interviews for The Number 23

Critic Reviews for The Number 23

Audience Reviews for The Number 23