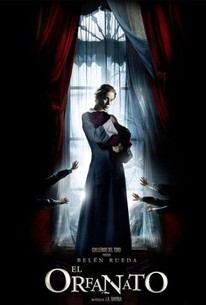 Deeply unnerving and surprisingly poignant, The Orphanage is an atmospheric, beautifully crafted haunted house horror film that earns scares with a minimum of blood.

Pan's Labyrinth director Guillermo del Toro produces director Juan Antonio Bayona's gothic frightener about a long-abandoned orphanage with a particularly troubling past. As a child, young orphan Laura spent her formative years being cared for by the staff of a large orphanage located by the Spanish seaside. Those were some of the happiest years of Laura's life, and now, 30 years later, the former charge returns to the dilapidated institution with her husband, Carlos, and their seven-year-old son, Simon, to reopen the orphanage as a facility for disabled children. However, something ominous haunts the darkened hallways of this silent, stately manor. When Simon's behavior begins to grow increasingly bizarre and malicious, Laura and Carlos start to suspect that the mysterious surroundings have awoken something ominous in the young boy's imagination. It's not long before Laura, too, is drawn into this disturbing web and the repressed memories of the past come flooding back in a terrifying torrent of tension and deeply disturbing revelations. With opening day drawing near and their situation growing increasingly grim by the hour, Carlos attempts to write off Simon's bizarre behavior as a desperate bid to get more attention from his distracted parents. Laura isn't so easily convinced of this theory, though, and soon embarks on a desperate quest to unearth the terrible secret that lurks in the old house, waiting for just the right moment to inflict devastating damage on both her and her family.

Pedro Morales
as Father 2
View All

News & Interviews for The Orphanage

Critic Reviews for The Orphanage

Audience Reviews for The Orphanage