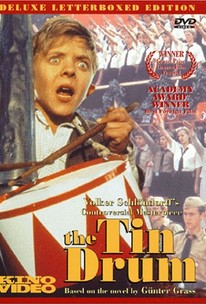 In Volker Schlöndorff's award-winning adaptation of Nobel Prize winner Günter Grass' allegorical novel, David Bennent plays Oskar, the young son of a German rural family, circa 1925. On his third birthday, Oskar receives a shiny new tin drum. At this point, rather than mature into one of the miserable specimens of grown-up humanity that he sees around him, he vows never to get any older or any bigger. Whenever the world around him becomes too much to bear, the boy begins to hammer on his drum; should anyone try to take the toy away from him, he emits an ear-piercing scream that literally shatters glass. As Germany goes to hell during the 1930s and '40s, the never-aging Oskar continues savagely beating his drum, serving as the angry conscience of a world gone mad. The intense and visceral Tin Drum was one of the most financially successful German films of the 1970s and won the 1979 Oscar for Best Foreign Film and the 1979 Golden Palm (which it shared with Apocalypse Now). In the late '90s, the film became the center of a censorship controversy when some U.S. videotapes were confiscated because of the film's supposed violation of a child pornography statute. ~ Hal Erickson, Rovi

Werner Rehm
as Scheffler the Baker

Otto Sander
as Meyn the Musician

Mieczyslaw Czechowicz
as Kobyella
View All