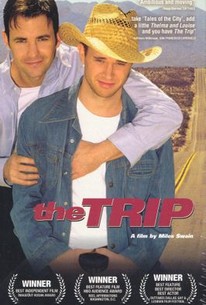 Stretching from the 1970s to the 1990s, The Trip chronicles the often turbulent romance between two gay men. One night in 1973, teenagers Tommy (Steve Braun) and Alan (Larry Sullivan) meet at an L.A. party. While Tommy is openly gay and organizes for gay civil rights, Alan, an aspiring journalist, is a repressed, button-down member of the Young Republicans who is working on his first book, a thick volume about the evils of homosexuality. On the pretext of interviewing him for his book, Alan invites Tommy to his house for dinner, where the sexual tension between the two is so throbbingly blatant that Alan's girlfriend makes a hasty exit. An intense romance between the two men follows. When we next see them, it's 1976, and Alan's book has been published anonymously and is being used by right-wingers who are supporting Anita Bryant's "Save Our Children" campaign in Florida. Unfortunately, Tommy finds out that Alan wrote the book and leaves him, and subsequently takes up with Peter (Ray Baker) an affluent closet case. It isn't until the '90s that Alan and Tommy meet again, and are confronted by the romance they thought they had long left behind. The Trip was screened at the 2002 Philadelphia International Gay and Lesbian Film Festival.

Brian Leckner
as Man One

Miles Swain
as Mark
View All

Critic Reviews for The Trip

Audience Reviews for The Trip