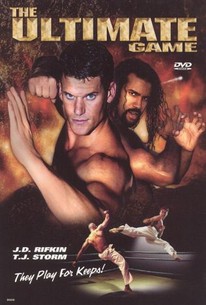 Two martial arts champions find themselves teaming up to fight a battle for their lives in this action-thriller. Sato (Kevin Ula Christie) is an eccentric multi-billionaire with a keen interest in the martial arts. Once a year, Sato and his men scour the globe looking for the best of the best in several different fighting styles to bring them together for a special tournament on a private island, with the final victor walking away with a purse of one million dollars. Jack (J.D. Rifkin) is an ordinary man with extraordinary fighting skills who is tapped to take part in the tournament, though he displays a certain reluctance about leaving his wife and children behind. However, Jack runs afoul of Ivan (Tony O'Brien), a ruthless gambler with criminal connections, who is determined to see that Jack never leaves the Island. Jack makes a valuable friend in Rick (T.J. Storm), a top-rank fighter who used to be associated with Ivan, and together Jack and Rick fight for their freedom and survival against two of Ivan's underlings, Slater (Paul Logan) and Rusty (Mark Griffin).

Critic Reviews for The Ultimate Game

Audience Reviews for The Ultimate Game

There are no featured audience reviews for The Ultimate Game at this time.