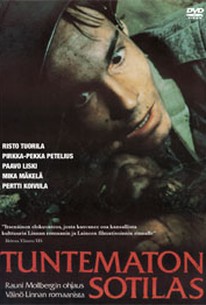 The first version of this story was released in 1955 with (Edvin Laine as director and no one less than a 90-year-old Jean Sibelius co-creating the score with Ahti Sonninen. This mid-'80s release is based on the same novel by Vaino Linna (who co-scripted the screenplay), but unlike the scenario in 1955, it is no longer a political hot potato. (The 1955 film was removed from competition at Cannes because of politics.) At issue are two wars for the Finnish province of Karelia fought in 1939-1940 and again in 1941-1944 against a menacing Russian encroachment. During World War II, however, the Finns were briefly allied with Hitler against the Soviet Union, and that is one point of enormous controversy. Another point revolves around whether it was prudent to go so far into Russian territory in the war -- and how does one depict the Russian stance in all this? Here, the story is a simple, direct, and honest look at the lives and deaths of a group of Finn soldiers in a series of battles that ultimately culminated in the loss of 80,000 and the province as well. The action is realistic, none of the soldiers are given a Hollywood veneer, and the three-hour running time entertains without a lag or false note. ~ Eleanor Mannikka, Rovi

Risto Tuorila
as Koskela
View All

There are no critic reviews yet for The Unknown Soldier (Tuntematon sotilas). Keep checking Rotten Tomatoes for updates!

There are no featured audience reviews for The Unknown Soldier (Tuntematon sotilas) at this time.