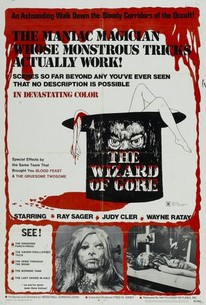 The Wizard of Gore

The Wizard of Gore Photos

A sinister illusionist gets away with ghastly murders on-stage in this unique horror story. Though Montag the Magnificent (Ray Sager) appears to be eviscerating beautiful volunteers from the audience with railroad spikes, chainsaws, and punch presses, the girls always smile afterward and walk away unscathed, leading the adoring crowd to admire the magician's handiwork. However, each evening, those same women are found horribly murdered in similar fashions, leading a young couple to take interest in the case. Sherry Carson (Judy Cler) is fascinated with Montag's show and wants to feature his magic on her afternoon television program. Her boyfriend, Jack (Wayne Ratay), is a sports writer, but he decides to investigate the weird homicides that have plagued the city since Montag appeared. Eventually, it becomes clear that the magician is planning to commit mass murder by hypnotizing the audience of Sherry's TV show, and Jack has to act fast. But the evil Montag's magic has already warped the fabric of reality, and no outcome is certain.

Ray Sager
as Montag the Magnificent

Eskandar Ameripoor
as Man on Stage

Alex Ameripoor
as Man on Stage
View All

Critic Reviews for The Wizard of Gore

Audience Reviews for The Wizard of Gore

The Wizard of Gore Quotes