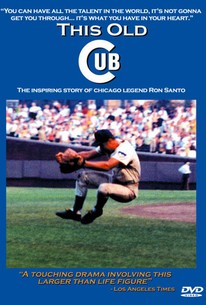 On a baseball team not often cited for its great players, Ron Santo was a hero and a legend. As a third baseman for the Chicago Cubs, Santo played 14 seasons (1960 through 1974), made the All-Star team nine times, earned five Gold Gloves, and in 1965 became the team's youngest ever captain. While Santo was establishing himself as one of the Cub's greatest players, he was also hiding a secret -- in 1958, the same year Ron signed with the Cubs organization, he was diagnosed with diabetes, but refused to tell his fellow players or the team's physicians for fear of being bumped from the team. In 1971, as the Cubs celebrated Ron Santo Day at Wrigley Field, the baseball great finally went public with his condition, becoming a leading Midwest spokesman and fundraiser for the Juvenile Diabetes Research Foundation. In 1990, Santo renewed his association with the Chicago Cubs as a commentator for the team's home games on radio station WGN, and in 2003, he became one of only three Cubs players to have their number officially retired. This Old Cub is a documentary about Ron Santo's remarkable life and career, not only examining his years as a player and broadcaster, but his longtime struggle with the disease that has cost him a leg but has failed to break his spirit, and the crusade by fans and admirers to see Santo inducted into the Baseball Hall of Fame. Noted Cubs enthusiasts Bill Murray, Dennis Franz, and Gary Sinese, and baseball legends Ernie Banks, Johnny Bench, Willie Mays, and Tommy Lasorda are interviewed onscreen; actor Joe Mantegna narrates.

Critic Reviews for This Old Cub

Audience Reviews for This Old Cub

There are no featured audience reviews for This Old Cub at this time.