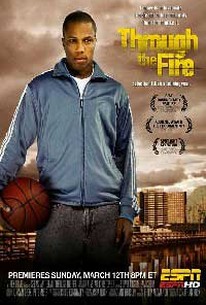 Through the Fire may raise more questions than it answers, but it's no less engrossing for its flaws.

Through the Fire Ratings & Reviews Explanation

Through the Fire Photos

Spend an emotional year in the life of a Coney Island basketball prodigy as filmmakers follow rising hoops star Sebastian Telfair as he struggles to overcome the adversity of the streets, transcend poverty, and earn a well-deserved place in the annals of the NBA. Few basketball stars can claim to have soared to the early-career heights that Telfair did on the streets of New York City, but after earning a reputation as one of the most skilled ball-handlers on the court by the tender age of nine, few would deny that he possessed the potential greatness. Mentored by his determined older brother -- a failed NBA hopeful himself -- Telfair remained steadfast and determined to realize the dream that had previously eluded his older sibling, and provide a more hopeful future for his supportive family.

News & Interviews for Through the Fire

Critic Reviews for Through the Fire

Audience Reviews for Through the Fire

Through the Fire Quotes