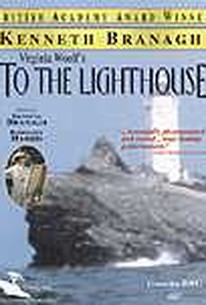 To the Lighthouse Ratings & Reviews Explanation

Like the Virginia Woolf novel which it interprets, this 1983 BBC production has three parts: "The Window," "Time Passes," and "The Lighthouse." The first focuses on one day in the life of the Ramsay family -- the father and mother, their eight children, and four guests -- while they vacation on the Cornwall peninsula in remote southwestern England. In conversations in the summer house, at the beach, during strolls, and at cricket and wrestling matches, the characters reveal their beliefs, their prejudices, and their longings in an era when old traditions are dying and new traditions are quickening. James, six -- a brat to his father but a dear to his mother -- repeatedly asserts his wish to visit a lighthouse on an island within easy rowing distance. His father Michael Gough refuses to go (and, thus, no one goes) because the weather isn't right. In a moment of dramatic irony, the self-centered father scolds the boy for always thinking only of himself. Self-effacing Mrs. Ramsay (Rosemary Harris) comforts the child. She also sees to the needs of other family members and guests, who have lighthouses of their own -- metaphorical ones -- to preoccupy them. Her daughter, Prue, for example, anticipates her coming marriage while visitor Lily Briscoe looks forward to her career as a painter. In defiance of social convention, Briscoe chooses to remain unmarried. The film depicts the second part of the novel, "Time Passes," with transitional scenes showing changes of season over ten years. During this period, Mrs. Ramsey dies, and Mr. Ramsey laments her death in a weeping spell, saying she never really understood that he loved her. In the final part, "The Lighthouse," James finally gets his wish when he, his father, and other members of the family row out to the towering beacon. On the shore, meanwhile, Lily Briscoe finishes a painting of Mrs. Ramsey. ~ Mike Cummings, Rovi

Critic Reviews for To the Lighthouse

There are no critic reviews yet for To the Lighthouse. Keep checking Rotten Tomatoes for updates!

Audience Reviews for To the Lighthouse

There are no featured audience reviews for To the Lighthouse at this time.

To the Lighthouse Quotes