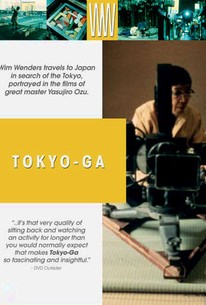 In this intriguing documentary, award-winning German director and producer Wim Wenders combines clips from one of his favorite directors, Ozu Yasujiro (see the tribute to Ozu, Ikite wa Mita Keredo.. by Inoue Kazuo), with actual scenes from the sprawling, crowded megalopolis of Tokyo to discover where the real world and cinematic license may intersect, if at all. Ozu's films captured the poignant and fleeting aspects of worldly existence -- as in colorful autumn leaves that cannot last long. Wenders almost emulates his technique when he decides, in this 92-minute look at Tokyo -- to spend time on fragments of city life that are telling, eloquent statements of a Japanese ethic. Golfers on city rooftops, the neon lights of the famous Ginza shopping area, baseball games in a cemetery, the omnipresent televisions (even in taxis), and the waxed-over food that stands for months and years in restaurant windows to advertise the menu are all surreal and eloquent scenes. Juxtaposed against the noise and bustling crowds in a city in which people live elbow-to-elbow -- and contrasted with viewpoints on Ozu offered by two former associates -- these scenes and their counterpoints present a well-rounded view of Tokyo, Ozu, and what it means to be Wim Wenders filming in Japan.