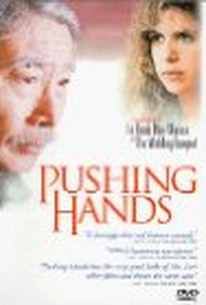 Acclaimed Taiwanese filmmaker Ang Lee made his directorial debut with this drama, leavened with gentle comedy, about a household turned upside down by a man who could not be much more out of place. Mr. Chu (Sihung Lung) is an elderly gentleman who has devoted much of his life to studying and teaching tai chi; growing old and wanting to be closer to his family, he decides to move in with his son. However, Mr. Chu has lived all his life in Beijing, and his son Alex (Bo Z. Wang) lives in New York City. Chu arrives at Alex's doorstep not knowing a single word of English, and he soon finds himself out of sorts in the home of his very Americanized son. Alex's wife Martha (Deb Snyder) is a writer who is dealing with the stress of publishing her first novel, in addition to watching over her six-year-old son. Mr. Chu is very much at odds with American customs and technology, and he even gets lost when he tries to take a walk; Martha soon feels as if she's watching over two children rather than one, while Mr. Chu resents his loss of dignity and independence. Eventually, he tries to strike out on his own and get a job, but the harder he tries to feel at home in New York, the more alien he seems. Ang Lee and Sihung Lung would team up again on Lee's next two films, The Wedding Banquet and Eat Drink Man Woman. ~ Mark Deming, Rovi