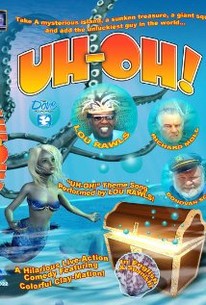 Uh Oh! is a feature film with a running time of 93 minutes. It is a hilarious and varied blend of comedy, action and adventure. This family-oriented PG rated movie will be entertaining for all ages but is specifically designed for children. Uh Oh! is the story of Jonny, a silly, good-hearted, bumbling boob with an uncommon streak of bad luck, until he meets a Sea Captain. He goes through several jobs and sets of circumstances where he inevitably messes up, thus revealing the meaning of the film title -- he spends most of his time saying "Uh Oh!" as he watches fiasco after fiasco unfurl, with him as the catalyst. After being kicked out of his apartment for his shortcomings, we follow Jonny on his convoluted and often times ridiculous journey around the city to a sea harbor. Along the way, we are introduced to a memorable cast of comical characters, including Captain Squid, Cap'n Squid's ex-girlfriend Captain Pearl, a group of cutthroat Tonganyekans from the Islands of the South Pacific, and a malicious giant squid named Squiddy. As the plot unfurls, we discover that Captain Squid is involved in a quest to find a sunken treasure guarded by the aforementioned giant squid. Hot on the trail of Captain Squid and his new friend Jonny are the Tonganyekans, ready to nab the very same treasure and willing to do just about anything to make sure it's theirs, but for a much more ambitious reason: among the jewels and gold hidden fathoms below, there is an ancient scepter imbued with the power to rule all the islands of the world forever. With ruthless treasure hunters on their tail and a hungry squid waiting at their destination, the Captain and Jonny face the adventure of a lifetime to save the scepter, the treasure, their boat and hopefully, themselves.

There are no critic reviews yet for Uh Oh!. Keep checking Rotten Tomatoes for updates!

There are no featured audience reviews for Uh Oh! at this time.