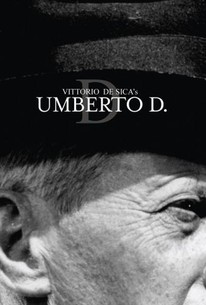 Anchored by Carlo Battisti's moving performance as Umberto D, Vittorio de Sica's deeply empathetic character study is a bracing glimpse into the lives of the downtrodden.

Produced, directed, and co-scripted by Vittorio de Sica, Umberto D is a disarmingly simple film about an alarmingly complicated social issue. Umberto (Carlo Battisti) is a retired civil servant, bereft of friends--save for his pet dog--and family. Unable to pay the rent on the shabby room where he has lived for three decades, Umberto is slated for eviction. His angered protests to the Italian government about the cavalier treatment afforded him and his fellow senior citizens fall upon deaf ears. Desperately trying to raise his rent money, Umberto discovers that no one really wants him around. He contemplates suicide, but decides not to go through with it out of concern for his dog's well-being. At film's end, Umberto is "doomed to live." Though the story has the potential for a heavy-handed approach, DeSica wisely follows the edict established by co-scenarist Cesar Zavattini: the camera does not comment, it merely observes. A box-office failure in Italy (where it ran into resistance from government officials who preferred that the senior-citizen dilemma be swept under the rug), Umberto D was the recipient of numerous industry and festival awards.

Memmo Carotenuto
as Voice of Light