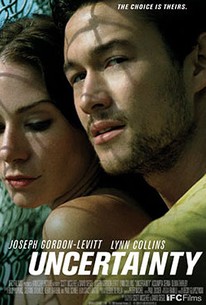 Uncertainty benefits from an evocative setting and likable leads, but its gimmicky gambit fails to pay off, fatally undermining its impact.

Responsibility clashes with freedom as a young New York City couple experiences two decidedly different holidays in this drama from filmmaking duo David Siegel and Scott McGehee (Suture, The Deep End). It's the Fourth of July, and Kate (Lynn Collins) and Bobby (Joseph Gordon-Levitt) are struggling to make a decision: do they stick with tradition and spend the weekend with Kate's family, or do they set out on their own for a spontaneous adventure? After making their initial decision, an alternate narrative emerges to show just what would have happened had they chosen to do otherwise. While the decision-making process may seem mundane, the implications of each choice are profound. Sure, a holiday with the family doesn't seem nearly as exciting as an impromptu romantic trip, but that doesn't mean it will be any less dramatic. As the stories diverge and a "what if" scenario becomes reality, it soon becomes apparent how much one seemingly minor decision can ultimately affect the rest of our lives. ~ Jason Buchanan, Rovi

Marin Gazzaniga
as Nurse
View All