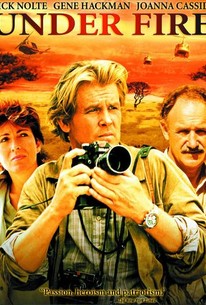 This gripping, emotional story of a roving photographer's transformation from a neutral artist with a camera to an involved human rights activist with a camera begins in Chad, travels to Nicaragua in the early 1980s, and ends when the Nicaraguan dictator Somoza takes off for the palm trees and beaches of Florida. Nick Nolte brilliantly interprets his role as the photographer Russell Price, and Joanna Cassidy is Claire, the radio journalist he meets while in Chad, along with her lover, Time Magazine reporter Alex (Gene Hackman), who ends up opting for a plush job as a TV anchorman and a quiet life on Long Island. When Alex leaves, Claire heads off to the next hot spot, Nicaragua, and Russell decides to tag along -- not because he is that interested in Nicaragua, but because he is interested in Claire. Once in the war-torn, Central American country, it does not take Russell long to see the vast difference between the corrupt, U.S.-backed dictatorship and the struggling guerrilla forces who have been fighting for a decade already. As his eyes are opened, he and Claire decide to go along with the rebels and film their fighting behind the lines. During one battle, the much-venerated rebel leader is shot dead, and Russell reluctantly agrees to fake a photo of the man as though he were still living, so as not to demoralize the army that looks up to him for leadership. The photo appears in the news around the world and causes such a furor that Alex shows up to demand an interview with the leader for national American television. It is on the way to this supposed interview that Alex leaves the car for a moment and is senselessly shot and killed by a government soldier, the whole episode filmed for the world by Russell's camera. This outrage (which actually occurred when journalist Bill Stewart was inhumanly shot by a Somoza soldier in full view of the video camera) soon makes global news and helps to hasten the overthrow of the corrupt dictatorship. Meanwhile, Russell has new issues to consider once his camera has become an "active" and not a "passive" observer of political unrest. René Enriquéz who plays the dictator Somoza in this film is a native Nicaraguan, related to a newspaper reporter killed by Somoza's government.

Critic Reviews for Under Fire

Audience Reviews for Under Fire