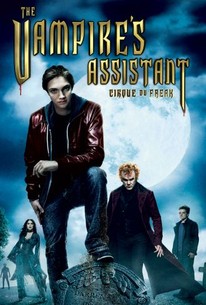 This overstuffed, scattershot vampire flick suffers from poor characterization and an unwieldy mix of scares and chuckles.

Based on the popular series of books by Darren Shan, Cirque du Freak: The Vampire's Assistant tells the story of a small-town teen who inadvertently shatters a 200-year-old truce between warring factions of vampires. Sixteen-year-old Darren (Chris Massoglia) is your typical adolescent; he spends most of his time with his best friend, Steve (Josh Hutcherson), earns decent grades, and generally manages to stay out of trouble. But trouble finds Darren when he and Steve make the acquaintance of a vampire named Larten Crepsley (John C. Reilly) while attending a traveling freak show at a local theater. Transformed into a bloodsucker by Crepsley, Darren joins the Cirque Du Freak and quickly ingratiates himself with the unusual cast of characters who populate it, including Madame Truska the Bearded Lady (Salma Hayek) and the traveling sideshow's towering barker (Ken Watanabe). As Darren works to master his newfound powers as a budding member of the supernatural underworld, he becomes a valued pawn between the vampires and their deadlier rivals, the Vampaneze. With tensions between the two sects intensifying, Darren must figure out a means of keeping the coming war from destroying his last vestige of humanity. Patrick Fugit, Orlando Jones, Willem Dafoe, and Jane Krakowski co-star.

Ann McKenzie
as Woman From Town

Patrick Fulton
as Kid Passing By

Tyler Chetta
as Kid in Hallway