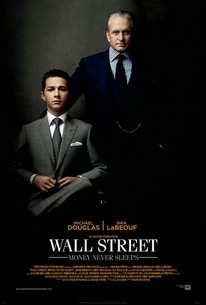 It's more entertaining than many sequels, but with Oliver Stone directing, a terrific cast, and a timely storyline that picks up where the original left off, Wall Street: Money Never Sleeps should be better.

Ambitious young investment banker Jacob Moore (Shia LaBeouf) discovers that greed is still the name of the game when he forges a fragile alliance with onetime Wall Street hotshot Gordon Gekko (Michael Douglas) shortly after Gekko is released from prison. Having served eight years for securities fraud, money laundering, and racketeering, Gekko emerges from prison to find that his daughter, Winnie (Carey Mulligan), prefers to remain estranged, and that his former Wall Street cohorts are still raking in the cash. Flash-forward to 2008, and Winnie is dating a proprietary trader named Jake Moore (LaBeouf), who expresses a passion for green energy while working for his mentor Louis Zabel (Frank Langella), of Keller Zabel Investments. Despite heading up one of the most prominent investment firms in the country, Louis Zabel is forced to personally fight for the future of Keller Zabel before the Federal Reserve after the company's stock takes a hit due to persistent rumors that it's being dragged down by debt. Denied a bailout from the government, Keller Zabel soon falls victim to a hostile takeover lead by powerful investment bank partner Bretton James (Josh Brolin), of Churchill Schwartz. His job on the line and his mentor out of the picture, Jake discovers that Gordon Gekko is out promoting his new book "Is Greed Good?" and decides to attend a lecture being given by the author at Fordham University. According to Gekko, greed is now sanctioned by the government, and the U.S. economy is on the verge of collapse as a direct result of leveraged debt and wild conjecture. When Jake goes behind Winnie's back to try and repair her relationship with her father, Gekko reveals his compelling theories on the likely reasons for Zabel's downfall. Later, as Jake begins plotting to avenge his mentor, Gekko starts to reveal his true colors. ~ Jason Buchanan, Rovi

Annie McEnroe
as Woman at Birthday

Nouriel Roubini
as Economist on TV

Faye Wattleton
as Professor at Fordham

Eloise Dejoria
as Woman #1 at Party

Anthony Scaramucci
as Panelist on TV

Ali Velshi
as Panelist on TV

Ed Bergtold
as Trader at Urinal

Kevin Keels
as Trader at Urinal

Ben Nisman
as Trader at Urinal

Tim Wilson
as Trader at Urinal

Melissa Francis
as Herself

Warren Buffet
as Himself

Graydon Carter
as Himself

James Chanos
as Himself

Sunil Hirani
as Himself

Thomas M. Joyce
as Himself

Joe Kernan
as Himself

Steve Liesman
as Himself
View All