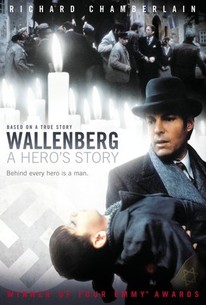 Raoul Wallenberg: A Hero's Story is a perfection-plus TV biopic, scripted by Gerald Green (Holocaust) and directed by Lamont Johnson (who won an Emmy for his efforts). Richard Chamberlain plays Raoul Wallenberg, scion of a well-to-do family of Swedish bankers. Although he is a Christian "Aryan," Wallenberg despises the anti-semitism of the Hitler regime. Not content with merely sitting back and viewing with alarm, Wallenberg vows to help as many Jewish victims of the Nazis as possible. Employed as a diplomat at the Swedish embassy in Budapest during World War II, Wallenberg is responsible for the escape of over 100,000 Hungarian Jews, thereby earning the enmity Nazi functionary Adolph Eichmann (played with the fury of a rabid animal by Kenneth Colley). Alas, Wallenberg himself falls victim to a "purge" of another variety at the end of the war, when he is arrested by the Russians and subsequently vanishes from the face of the Earth. Expensively lensed in England and Europe, Wallenberg: A Hero's Story was originally telecast in two parts on April 8 and 9, 1985.

There are no featured audience reviews for Wallenberg: A Hero's Story at this time.