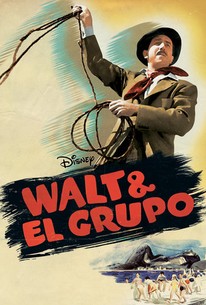 Theodore Thomas, son of the late Walt Disney Studios animator Frank Thomas (1912-2004) and director of the acclaimed 1995 documentary Frank and Ollie, helms this second foray into Disney history, Walt & El Grupo (2007). The subject this time lies somewhat outside the boundaries of Disney animation and rests on an unusual footnote: in 1941, Walt Disney personally led a "goodwill tour" and research expedition of South America, with a team of animators in tow whom he collectively christened "El Grupo." The voyage transcended passing personal interest on the part of the animators; its residual effects can be seen in several Latin-themed Disney projects -- notably, Saludos Amigos (1942) and The Three Caballeros (1945), both of which won Oscars, and other efforts designed to support the Good Neighbor Policy of the United States. With Walt & El Grupo, Theodore Thomas and his wife, Kuniko Okubo, combine rare, unseen 16 mm home movie footage of the original trip (held in the Disney vaults for years) with footage from their own trip through South America that retraces the Disney animators' original journey -- contrasting 1941 footage with glimpses of the same locales, shot 60 years later. On the soundtrack, Thomas and Okubo overlay reminiscences by the original travelers, taken from journals and letters and read by family members.

Critics Consensus: 9 Looks Great, But The Plot’s Weak
View All

There are no featured audience reviews for Walt & El Grupo at this time.