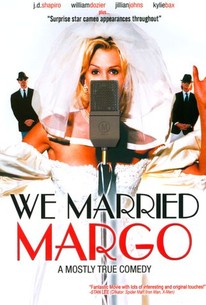 Two men forge a friendship under very, very difficult circumstances in this independent comedy. Jake and Rock are two guys with practically nothing in common -- Jake (J.D. Shapiro) is a neurotic New Yorker who will kvetch about his problems with anyone who will listen, while Rock (William Dozier) is a slobby and emotionally adolescent California surfer type. However, one important thing brings them together -- both Jake and Rock were married to the beautiful but extraordinarily temperamental Margo (Kylie Bax), and after Jake is dumped by Margo, he turns to Rock for emotional support. Before long, Jake and Rock become roommates, writing partners, and best friends, despite the fact that they drive each other up the wall, and as the two try to put together a film project about their lives with and without Margo, they discover just how many people have had their lives turned around sideways by her. We Married Margo features a number of celebrity cameos, including Cindy Crawford, Kevin Bacon, and Tom Arnold. Remarkably enough, We Married Margo was actually inspired by a true story, and writer, director, and star Shapiro did in fact meet Dozier after they were both involved with the same woman.

Tom Arnold
as Himself

Kevin Bacon
as Himself

Critic Reviews for We Married Margo

There are no critic reviews yet for We Married Margo. Keep checking Rotten Tomatoes for updates!

Audience Reviews for We Married Margo

There are no featured audience reviews for We Married Margo at this time.