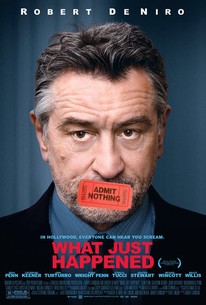 What Just Happened has some inspired comic moments, but this inside-baseball take on Hollywood lacks satirical bite.

Inspired by the personal memoirs of Hollywood producer Art Linson, Barry Levinson's fictional showbiz comedy stars Robert De Niro as a struggling movie producer who has just suffered through his second divorce, and slowly finds his soul being ground up in the machinations of the Hollywood machine. Ben (De Niro) is an aging producer whose career was already on a downward turn when his personal life went straight into the toilet. Not only is Ben juggling two ex-wives and a daughter who seems to have grown up overnight, but his colleagues seem to take pleasure in watching him suffer while he attempts to complete his latest film on an impossible schedule. "Fiercely" was supposed to be the visionary movie that revived Ben's career, but drug-addicted director Jeremy (Michael Wincott) has clashed with uncompromising studio chief Lou (Catherine Keener) following a disastrous test screening, and now it appears as if not even Sean Penn's presence in the film will be enough to make it a box-office hit. Meanwhile, Ben's ex-wife Kelly (Robin Wright Penn) can't seem to decide if she loves him or hates him, and his teenage daughter, Zoe (Kristen Stewart), has gone from playing with Barbie dolls to flirting with boys in the blink of a heavily mascaraed eye. As if that wasn't enough for one man to take in, screenwriter Scott (Stanley Tucci) is trying to broker a deal with Ben while simultaneously making a play for his former wife, and nebbish agent Dick (John Turturro) is so terrified of his own clients that he can't even ask Bruce Willis to shave his scraggly new beard for an upcoming role. It's all just another day in the world of runaway egos, treachery, betrayal, and deceit that is Hollywood, and if Ben can just make it to Cannes with a finished film under his arm and his sanity in tact, everything might just work out after all.

Bruce Willis
as Himself

Sean Penn
as Himself

Ron Li-Paz
as Rabbi
View All

News & Interviews for What Just Happened?

Critic Reviews for What Just Happened?

Audience Reviews for What Just Happened?