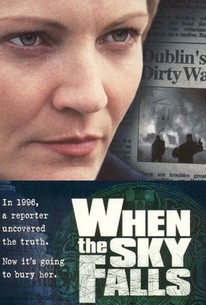 When the Sky Falls

In this crime drama adapted from a true story, Sinead Hamilton (Joan Allen) is a public relations agent turned journalist who is appalled at the corruption and drug trafficking in her native Dublin; determined to do something about it and make the city a safer place in which to bring up her son, Hamilton begins a series of investigative pieces exposing the major players in the city's dope trade, as well as possible links between drug dealing and the Irish Republican Army. Hamilton's stories win wide acclaim and lead to a public outcry to see that justice is served; they also make Hamilton a number of very dangerous enemies among the underworld, as well as the more corrupt segments of the law enforcement community. When the Sky Falls is based on the true-life story of Irish investigative reporter Veronica Guerin; Guerin worked on the early drafts of the script before she was murdered by members of the drug cartel she helped to expose, leading the producers to change the names of the characters and alter the story's outcome. The supporting cast includes Patrick Bergin as a police investigator, Pete Postlethwaite as a criminal insider who gives information to Hamilton, and Liam Cunningham as another notorious crime boss.

Pete Postlethwaite
as The Commandant

Critic Reviews for When the Sky Falls

Audience Reviews for When the Sky Falls

There are no featured audience reviews for When the Sky Falls at this time.

When the Sky Falls Quotes