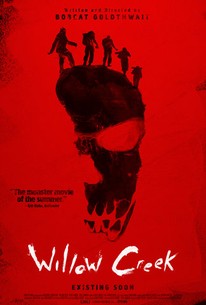 Writer-director Bobcat Goldthwait's first foray into horror doesn't break any new ground, but it does wring fresh terror from a well-worn genre formula -- and offers a few nasty laughs in the bargain.

Described by Jimmy Kimmel as "Scary and the Hendersons" and by writer-director Bobcat Goldthwait himself as "The Blair-Squatch Project," found footage movie Willow Creek is a radical departure in Goldthwait's career after directing a string of black comedies (World's Greatest Dad, God Bless America). In the great American tradition of people venturing into the woods and encountering absolutely pants-wetting terror, what starts as two dorks with a video camera having a lark in a national park metastasizes into something much deeper, darker, and queasier. Set in Humboldt County, California, Willow Creek centers on Jim (Bryce Johnson, Pretty Little Liars) a Bigfoot believer whose idea of a romantic getaway is to head deep into Six Rivers National Forest in Northern California, video camera in tow, trying to shoot his own Bigfoot footage at the site of the Patterson-Gimlin film. That 1967 fragment of footage purporting to show Sasquatch striding along a dry riverbed became a key artifact in the cryptozoology community, and Jim dreams of nothing more than setting foot on the actual location where it was shot. His long-suffering girlfriend, Kelly (Alexie Gilmore, World's Greatest Dad), agrees to tag along for the ride, despite the fact that she thinks Bigfoot has about as much chance of being real as leprechauns. (c) MPI Dark Skies

Steven Streufert
as Himself

Shaun White
as Herself

Nita Rowley
as Herself

Tom Yamarone
as Himself
View All